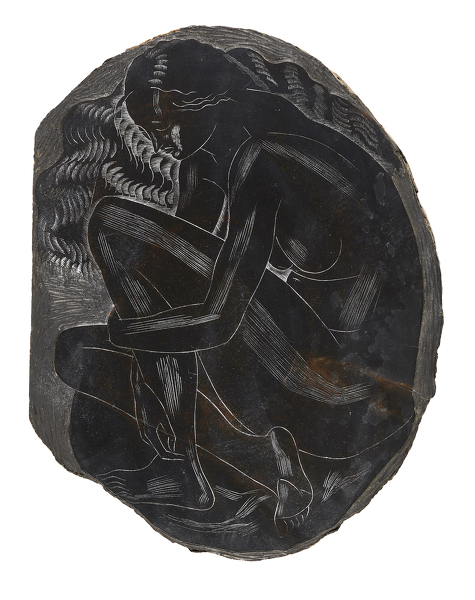 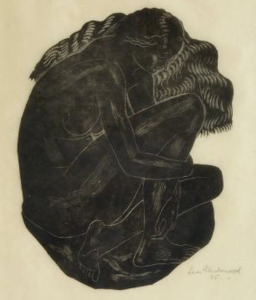 This original woodblock was given by Underwood to Margaret Bruce (1909-98), his studio assistant. Bruce trained at the Glasgow School of Art, 1928-32, and in the following year enrolled at the Brook Green School of Art; two years after this she became ‘studio stooge’, ie studio assistant, to Leon Underwood, and worked there until WW2, maintaining a friendship with him for the rest of his life.

Having produced etchings during his time at the Slade and in the early 1920s, Underwood had began to produce wood engravings in around 1924 at the same time as his early experiments with stone carving - the act of carving in relief the wood block is a continuation of his direct carving. At his Brook Green School Underwood offered an alternative art training to some of the most gifted artists of the inter-war generation, including Henry Moore, Eileen Agar, Blair Hughes-Stanton, and Gertrude Hermes. With a focus on experimental life drawing, the School was also a focus for experimental printmaking, after one of his pupils introduced a multiple line engraving tool called a velo which enabled them to achieve unusual visual effects in their wood engravings.

In 1925 Underwood and his pupils were to form the English Wood Engraving Society, reflecting the fact that their progressive imagery was at odds with the nostalgic work of many pastoral engravers of the same period. The following year Underwood moved to New York, where he set up a private drawing school in Greenwich Village and worked as an illustrator for publications including Vanity Fair and The New Yorker and illustrated several books, including his own Animalia and illustrated novel The Siamese Cat.

We are grateful to Simon Lawrence for assistance