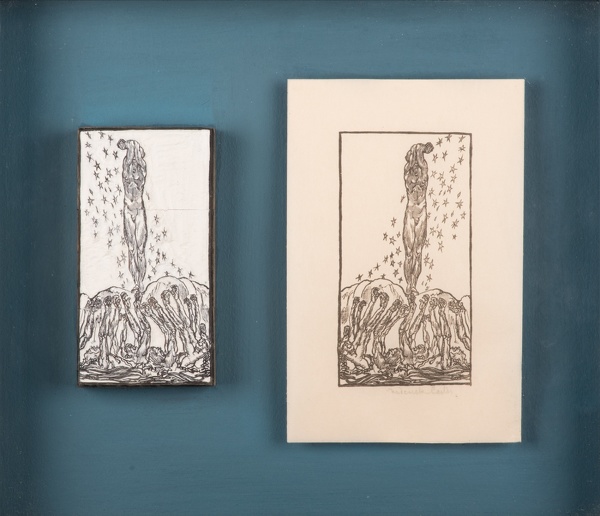 Hover over the painting to magnify (there may be an initial delay while the magnified image is loaded)
£1,200
Free shipping
Enquire
Add to cart


The original wood engraving double mounted with a signed print

Carter abandoned an early career as a surveyor and engineer to studied art in Paris, 1904, Antwerp, 1909-10 and London 1908-11, where he learnt his etching techniques under Frank Short. He showed at the RA, ROI, NEAC and was elected ARE in 1912. His artistic life before and after the World War I was centred around the Fitzroy Street area of London, and the Dieppe restaurant in Dean Street. He became a mystic symbolist artist, involved with Aleister Crowley and worked on illustrations for D.H. Lawrence's Apocalypse. He was also a friend of Austin Osmond Spare and helped with his theories of automatic drawing. From 1922 he taught etching at Liverpool School of Art and during the 1930's he abandon printmaking for writing but continued to paint until the late 1950's. His work is in the collections of the BM and V&A. A retrospective exhibition was held at the 20th Century Gallery, Fulham, London, 1998. Richard Grenville Clark's 1998 publication Frederick Carter A.R.G. 1883-1967.