After training at the Royal Academy Schools and working from a studio offered to him by Eric Ravilious (1903 - 1942) and Edward Bawden (1903 - 1989), by the 1930's, Moody was exhibiting at a variety of London venues and teaching at Wimbledon School of Art; he also became a founder member of the New Kingston Group of painters.  Fascinated by the Theatre he was later well known as an opera producer, commissioning stage sets from John Piper and Robert Medley. 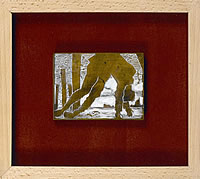