Painter, draughtsman, but primarily an etcher and engraver who was selftaught. Born in Dunedin, New Zealand, Buckland Wright studied history at Oxford and then architecture in London. He soon realised that he wanted to be an artist more than an architect and by 1921 he was living in Belgium and was elected a member of the Gravure Originale Belge in 1925. Was also a member of Xylographes Belges, SWE and LG. During the 1930s Buckland Wright lived and worked in Paris and frequently visited S W Hayter's Atelier 17. He had one-man shows in London and throughout the continent, sometimes signing his work J B W. Work held by Victoria & Albert Museum, British Museum and many galleries and museums in Europe and America. A master printmaker with an assured, swirling line, Buckland Wright passed on his skills after World War II when he taught at Camberwell School of Arts and Crafts, from 1948, and the Slade School of Fine Art, from 1953, the year that his book Etching and Engraving: Techniques and the Modern Trend was published. He illustrated over 5o books. Retrospective Blond Fine Art, 1981, Wolseley Fine Arts reviewing his Surrealist work, 1999, and The Golden Cockerel Years, 2001. In 2003, that gallery staged For My Own Pleasure - The Autonomous Prints, 1925-54, with an extensively illustrated catalogue. Lived in London. 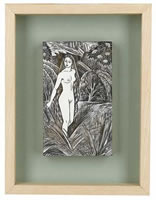