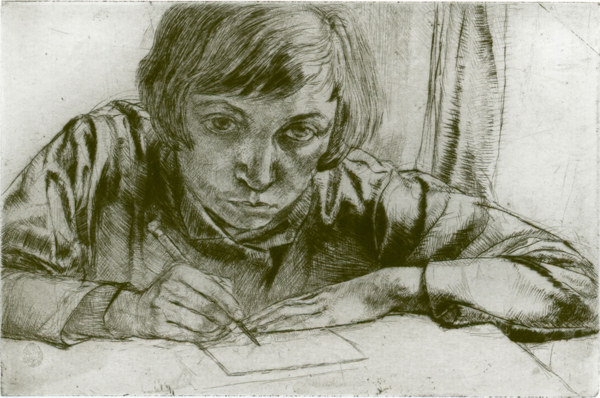 Evelyn Gibbs’ Self-portrait, made whilst at the Royal College of Art in 1927, a year before she applied for and won the coveted Rome Scholarship in Engraving, has much in common with, and might have been inspired by, Henry Fuseli’s Self-portrait of 1770. Gibbs confidently shows herself at the start of the process of producing a drypoint, the blank copper etching plate on which she is working soon to become the self-portrait we are looking at. The drypoint medium, (made with a needle to create a soft burr giving a characteristic velvety appearance), was a more immediate method of printmaking than etching (where acid is used to deepen the lines on the plate). Generally fewer prints can be pulled in the case of drypoint as the plate gets too worn. An etching, such as The Road, might typically be made in an edition of up to 50 prints.

The Road resulted in her election as associate of the Royal Society of Painter-Printmakers, in 1929, the year she won her Rome Scholarship. A review described it as ‘a beautiful little etching “The Road”, with it’s emotional significance – two tramps, a man and a woman are sitting crouched by the roadside, their heads upon their knees, utterly tired out – but the sunny road winds on through banked meadows away over the country . . . this etching promises well for Miss Gibbs’ future, more even than her accomplished line engravings.’ 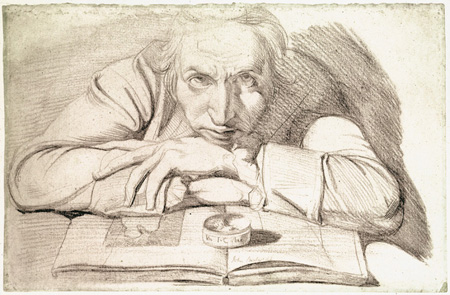 Drypoint is a more immediate method of printmaking than

etching, which requires acid to deepen the lines made on the surface

of the metal plate. In drypoint a drawing is made on the plate with an

drypoint needle, scratching the surface in such a way that a soft burr

only a few prints are made from the plate.

We are grateful to  Pauline Lucas and Todd Longstaffe-Gowan for assistance.