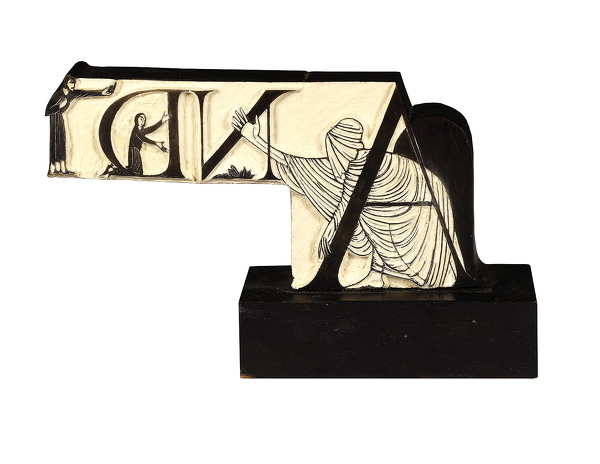 Provenance: The Raising of Lazarus and St Thomas 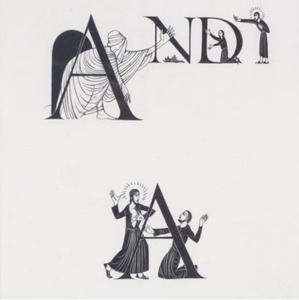 Eric Gill greatly prized his woodblocks - he bought them back from the Golden Cockerel Press, ran gesso into them, carved them into silhouettes and mounted them on pedestals as free standing objects.

The Four Gospels, designed by The Golden Cockerel Press and with engravings by Eric Gill, printed as an edition of 500,  was the culminating achievement of the private press movement.   Robin Gartin, in British Printmakers 1855-1955, has described it as 'being among the greatest book productions between the Wars'

Robert Gibbings, the owner of The Golden Cockerel Press, was responsible for setting the type, leaving appropriate spaces for which Gill designed the initial letters and words. Leaves curl into the space between paragraphs, swords hang down into the margin, and the symbols of the evangelists each hold up the title of their gospel. It was a marriage of image and text that recalls the best of medieval illuminated manuscripts, yet is suited perfectly to the modern age and flawless in its execution.

Experts on type and design have always been united in their praise of Eric Gillïs typeface designs. Robert Harling spoke of the letters'character and beauty, discipline and gaiety, whilst Stanley Morison said: The capitals that he did, I think, will be immortal. They'll be used as long as the Roman alphabet is ever used anywhere. 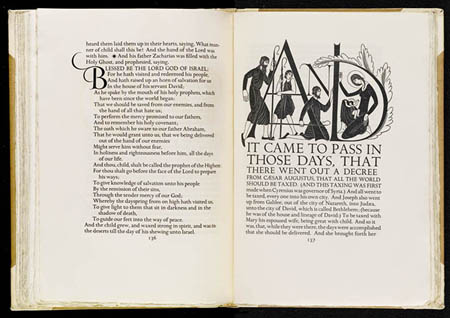 Letters are things, not pictures of things Eric Gill