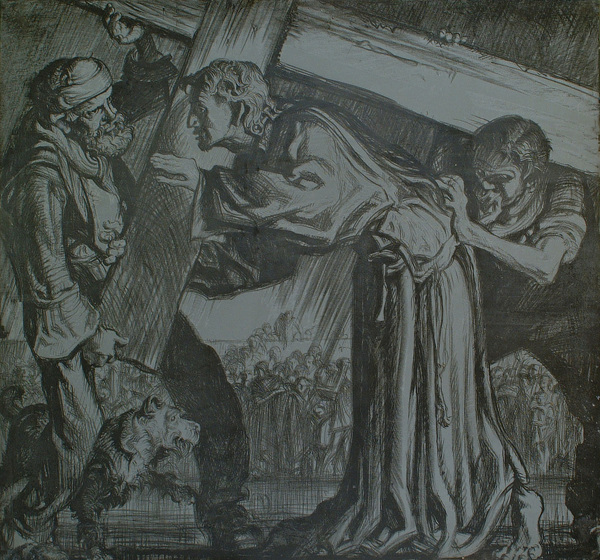 Brangwyn frequently included himself in his compositions: here he is seen supporting Christ and taking the weight of the cross on his back.  And for good measure, on left hand side,  Brangwyn has included his dog Roger.

In the early 1930s Frank Brangwyn told William de Belleroche that he had been thinking of making a set of the Stations of the Cross in lithography. A subject I've had at the back of my mind all my life. . . . I've always wanted to do this, and have thought about it for years. He thought that lithography was a medium which would suit the work and lend itself to dramatic treatment would make people realise the great tragedy stir up their religious beliefs, their emotions. Brangwyn began the series in 1934, drawing his designs on tracing paper. The drawings were then transferred to zinc lithographic plates by rubbing the back of the paper with red contact and tracing the outline of the image. Brangwyn worked on the zinc plates using a combination of lithographic chalk and etching tools, employing a variety of different methods to gain the exact effect and tonality he required.

The series was printed in February 1935. Appreciating that The Stations of the Cross would be placed on damp church walls, and having always been keen on innovatory techniques, Brangwyn chose to print two sets on sycamore which are now in the Chapter-Hall of the Benedictine Abbey of St Andrew, Zevenkerken, Bruges and in the Chapel of the Jesuit College, Campion Hall, Oxford where they form an integral part of the wood panelling. A further 16 sets were printed on paper and in 1935 the series was reproduced in a smaller format in The Way of the Cross. An Interpretation by Frank Brangwyn RA, with a commentary by Gilbert Keith Chesterton, who termed Brangwyn one of the most masculine of modern men of genius. As far as is known only one of the 16 lithographic sets was coloured and this was presented to St Michael's Abbey, Farnborough in the 1950s, de-accessioned in 2012.

The Stations of the Cross follow the tradition of the Flemish painters with whose work Brangwyn would have been familiar having been born in Bruges. The clothing is contemporary which gives the work immediacy, suggesting that the tragedy of the Calvary is never-ending. One is drawn into the story by the strength and proximity of the characters the viewer is made to feel the tragedy as if he were an eye-witness. As Chesterton points out, every face is different; and every face is vigorous, with an ugly energy that is more attractive than vulgar beauty. The man holding the cross in the 5th Station has almost simian features, the praying girl and toddler in the 8th catch our heart-strings, Christ's mother in the 14th is composed and we admire her restrained pain whilst in the 13th Station Brangwyn himself experiences the weight and enormity of what has occurred. In direct contrast to the bustling crowd is the pale, spiritual, enigmatic figure of Christ, who, as Chesterton points out, is thereby isolated, it does really make the central figure distinguished, in the exact sense of distinct.