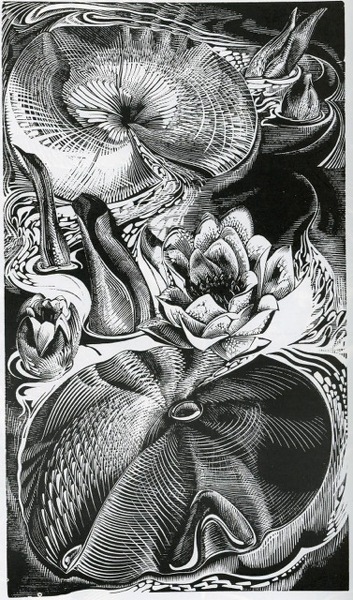 Printed and published by the artist in an edition of 30

In his book A History of Wood Engraving (1978), Albert Garrett, the President of the Society of Wood Engravers, described how in Water Lilies, Gertrude Hermes ‘had solved in her own terms the language for engraving a large circular plane that has gentle undulations. For most people, a waterlily leaf is a solid plane but in the engraving Hermes sees it as a space plane solution’. Hermes, who was one of the most imagina- tive and innovative wood engravers of her generation, drew much of her inspiration from nature. Trained by Leon Underwood at his art school in Hammersmith, she captured all manner of natural forms observed from the world around her – plants, animals, insects – with a rapidly flowing line. Transferring her preliminary sketches onto blocks of fine-grained wood, her distinctive style combined great technical skill with a bold sense of design. Described by the novelist Naomi Mitchison as a ‘a magician – or if you like priestess’, Hermes’ unique achievement lay in the way she rendered nature as dynamic and living, the feeling of movement giving the engravings an almost three-dimensional quality. ‘By the end of the second world war’, Garrett wrote, ‘Hermes in engraving is what [Barbara] Hepworth is in sculpture’.